What Does FISHY Mean?

FISHY is one of a number of animal-based memes which use childish language to invoke a feeling of sentimentality. Others include PUPPO (Puppy Meme), DOGGO (Dog Meme) and BIRDIE (Bird Meme).

FISHY is also widely used, both online and offline, as a slang word meaning "Suspicious."

When I write FISHY, I mean this: 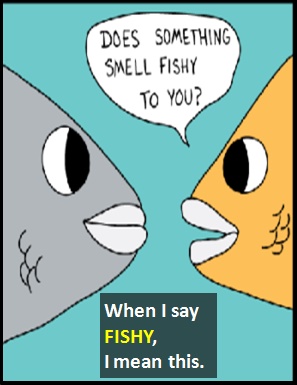 A fish meme is guaranteed to make you smile.

Here are examples of FISHY being used in conversations:

An Academic Look at FISHY

FISHY is a slang word. Slang refers to words, phrases and uses of language that are regarded as very informal and which are often restricted to a special context or a particular group of users.

Before the digital era we didn't use memes, but the word FISHY was commonly used by very small children to refer to a fish.

Example of FISHY Used in a Text