What Does GAY BEAR Mean?

Many traders dislike bears because they're people who make money from other people’s misery (when a stock declines). The opposite of a bear is a bull. A bull is someone who expects a stock to rise. In other words, a bear sees the glass as half empty, while a bull sees it a half full.

Due to the use of "bear" and "bull" on Reddit's WallStreetBets (WSB), a subreddit about stock market bets full of memes and slang terms, the bears are commonly referred to as "gay bears" and bull are referred to as "bull gang." When "gay" was added to the term "bear," it grew to mean wanting to profit off of a stock going down.

Gay bear is typically denoted with an LGBT flag and a bear emoji.

When I write GAY BEAR, I mean this: 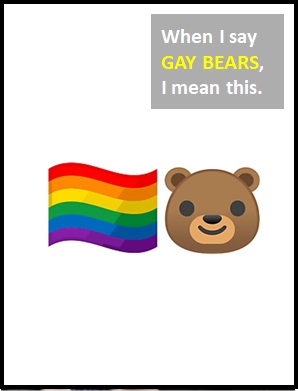 A GAY BEAR is a stock shorter or someone who expects a stock to decline.

"Someone who expects a stock to decline or a stock shorter" is the most common definition for GAY BEAR on Snapchat, WhatsApp, Facebook, Twitter, Instagram, and TikTok.

Examples of GAY BEAR in Sentences

Here are examples of GAY BEAR being used in conversations:

An Academic Look at GAY BEAR

GAY BEAR is typically used as a noun (i.e., a naming word).

Example of GAY BEAR Used in a Text