What Does GM Mean?

The abbreviation GM is commonly used in texting, speech and print. Here are explanations of some of the most popular definitions:

GM is most often used in texting with the meaning "Good Morning." In this context, GM is a straightforward salutation.

GM is now widely used, especially in print, with the meaning "Genetically Modified." In this context GM refers to organisms that have been altered through genetic-engineering techniques (commonly to produce medicine and food).

GM is also used as a common response during online gaming with the meaning "Good Move" to congratulate a player for a shrewd move. Such a move is usually one that puts the sender under pressure (i.e., a move similar to "check" in chess).

A "Game Master" is a person who runs or referees a Massively-Multiplayer Online Role-Playing Game (MMORPG).

When I write GM, I mean this: 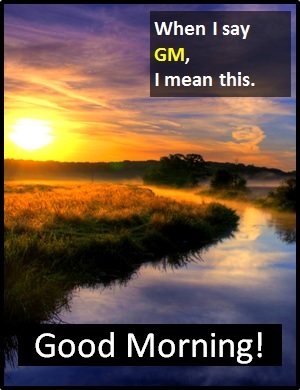 The most common meaning for GM is now "Good Morning."

"Genetically Modified" is another common definition for GM.

"General Motors" Is another definition for GM.

"Good Move" is a common definition for GM on gaming apps, such as Discord and Telegram.

"Game Master" is another gaming-related definition for GM.

Examples of GM in Sentences

Here are examples of GM being used in conversations:

An Academic Look at GM

When GM means "Good Morning" or "Good Move," it is used like a standalone declarative sentence (i.e., a statement). When it means "Genetically Modified," it is an adjective. When a noun is needed, it is more common to see GMO (Genetically Modified Organism).

Before the digital era, we would have just said "Good Morning" instead of using the abbreviation GM.

Example of GM Used in a Text