What Does HWP Mean?

The abbreviation HWP is used on dating sites (e.g., Tinder, Zoosk and Match.com) as a way of describing a person's physique without actually giving body measurements. For example: It is generally believed that the majority of users on dating sites who state they are HWP are usually at least slightly overweight.

Dating sites are full of specialist abbreviations (see our list of dating terms), which have their roots in a time when personal ads featured in local newspapers and users were charged by the word. A term like HWP would incur a fee for just one word while still offering a fair amount of information. "Height Weight Proportional" would, of course, cost three times as much.

When I write HWP, I mean this: 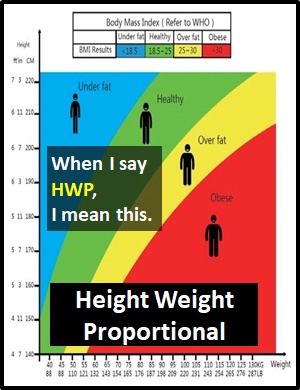 Very few people who describe themselves as HWP have the BMI scale in mind.

HWP means "Height Weight Proportional." This is the most common definition for HWP on Craigslist, Tinder, Zoosk and Match.com.

Examples of HWP in Sentences

Here's an example of HWP being used in conversation:

An Academic Look at HWP

Of note, HWP is an initialism abbreviation. This means it is pronounced using its individual letters (i.e., Aitch Dublyu Pee). (Initialisms contrast with acronyms, which are spoken like words.)

Before the digital era, we would have just said something like "average build" instead of using HWP.

Example of HWP Used in a Text