What Does GWI Mean?

GWI means "Get With It." The abbreviation GWI, with the meaning "Get With It," is typically used to tell someone to catch up with the conversation or get up to date with the current situation or latest trends.

GWI was a popular saying in the 1960s and 1970s. Used mostly between friends nowadays, it is often delivered with a touch of sarcasm or humour.

Of note, GWI can also refer to "Gulf War Illness," which is a chronic disorder affecting personnel involved in the 1990–91 Gulf War.

When I write GWI, I mean this: 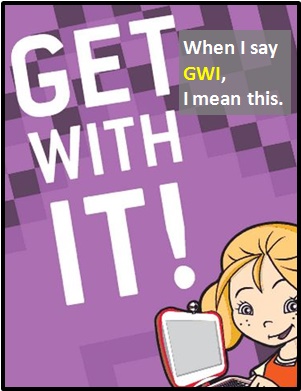 Examples of GWI in Sentences

Here are examples of GWI being used in conversations:

An Academic Look at GWI

As it is pronounced using its individual letters (i.e., "Gee Dbl-Yoo Eye"), GWI is classified as an initialism abbreviation. Initialisms are different to acronyms, which are spoken like words.

The abbreviation GWI is typically used as an imperative (i.e., an order).

Before the digital era, we would have just said "Get With It" instead of using the abbreviation GWI.

Example of GWI Used in a Text