What Does HAY Mean?

When used with the meaning "How Are You?" the abbreviation HAY is similar to HAYD ("How Are You Doing?") and HAYT ("How Are You Today?"), i.e., it is an informal greeting, which usually does not require an honest or serious answer. Unless the conversation is between close friends, a short and general response is expected. However, if used between friends, HAY may be a genuine inquiry as to their wellbeing.

The phrase "How Are You?" can also be abbreviated as HRU?

HAY is also used with the meaning "How About You?" In this context, HAY is normally used as a response to a question. It is typically used to confirm the other person's plans or to assess their opinion, in the same way as HBU and HBY (which both mean "How 'bout You?").

When I write HAY, I mean this: 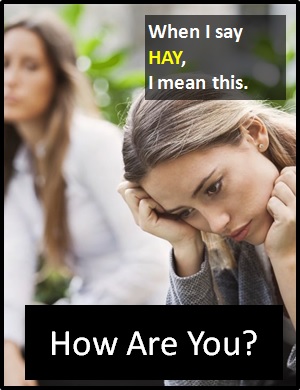 HAY also means "How About You?"

"How About You?" is another definition for HAY.

Examples of HAY in Sentences

Here are examples of HAY being used in conversations:

An Academic Look at HAY

HAY plays the role of an interrogative sentence (i.e., a question), but it is commonly seen without a question mark. It can be written "HAY?" or "HAY."

As it is pronounced using its individual letters (i.e., "Aitch Ay Why"), HAY is classified as an initialism abbreviation. Initialisms are different to acronyms, which are spoken like words.

Example of HAY Used in a Text