HDTH (How Did That Happen?) is used to request an explanation of how an event occurred. (In other words, the meaning of the expanded abbreviation can be taken literally.) Of note though, HDTH is also used to request an explanation of why an event occurred. (NB: WDTH is not used for this, most probably because it is an accepted abbreviation for "width.")

You now know what HDTH means, but are you good at Cyber Speak? Well, let's see!

When I write HDTH, I mean this: 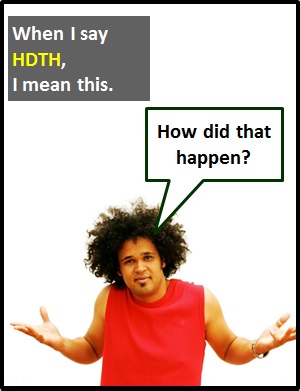 "How did that happen?"

Examples of HDTH in Sentences

Here are examples of HDTH being used in conversations:

An Academic Look at HDTH

HDTH is an initialism abbreviation. Technically, this means it is pronounced using its individual letters (i.e., Aitch Dee Tee Aitch), but as this is harder to say than "How did that happen," it is not often said using its letters. In other words, the abbreviation HDTH is for efficiency in writing and not efficiency in speech.

HDTH plays the role of an interrogative sentence (i.e., a question), but it is commonly seen without a question mark. In other words, it can be written " HDTH?" or "HDTH".

Example of HDTH Used in a Text

HDTH (how did that happen?) HDYDT (how did you do that?) HDYK (how did you know?) HDYD (how do you do?) FNAR (for no apparent reason) FSR (for some reason)