What Does HH Mean?

The abbreviation HH is widely used with a number of definitions, including "Ha-Ha," "Hand History," "Heil Hitler," "His/Her Highness" and "His Holiness." Here is a little more information on each of these main definitions. (Examples of usage can also be found below.)

HH is sometimes used as an abbreviation of the salute "Heil Hitler." In this context, it is typically used by neo-NAZIs, but may also be used as a poor attempt at humor.

In the Catholic church, HH is used to refer to "His Holiness" the Pope.

When I write HH, I mean this: 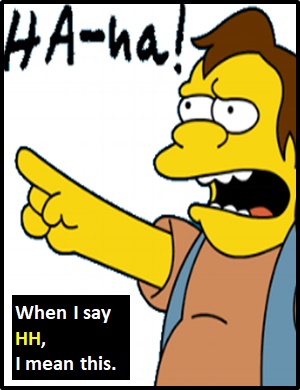 Examples of HH in Sentences

Here are examples of HH being used in conversations:

(Here HH is being used with the meaning "Hand History.")

(Here HH is being used with the meaning "Heil Hitler.")

An Academic Look at HH

As it is pronounced using its individual letters (i.e., "Aitch Aitch"), HH is classified as an initialism abbreviation. Initialisms are different to acronyms, which are spoken like words. HH is not typically spoken using its letters. It is usually employed for efficiency in writing and not efficiency in speech.

Before the digital era, we would have just said "Ha-Ha," "Hand History," "Heil Hitler," "His/Her Highness" and "His Holiness" instead of using the abbreviation HH.

Example of HH Used in a Text