What Does IAG Mean?

The abbreviation IAG is used with the meaning "It's All Good" to indicate that everything is alright or cool. IAG usually implies that there is nothing untoward happening. However, it can also be used as a quick way to end a conversation, especially if the sender doesn't want to talk about something.

When I write IAG, I mean this: 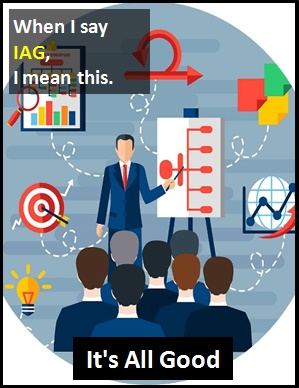 It's All Good with the International Airlines Group.

Examples of IAG in Sentences

Here are examples of IAG being used in conversations:

An Academic Look at IAG

IAG is used as a standalone declarative sentence (i.e., a statement). In other words, it is not used as another part of speech within a wider sentence.

"It's All Good" is an affirmative sentence, which is a statement that is positive rather than negative.

Example of IAG Used in a Text