What Does VG Mean?

VG means "Very Good." The abbreviation VG is used to convey that a person, service or object is better than normal.

Of note, VG also refers to a now defunct UK supermarket chain, which operated from the 1970s through to its acquisition by the Alldays chain in the 1990s. Alldays itself was bought out by the Co-operative group in 2000.

Also, in the US the VG's Grocery chain (not related to the VG chain in the UK) operates 16 stores in the Michigan area, and was established in 1961.

When I write VG, I mean this: 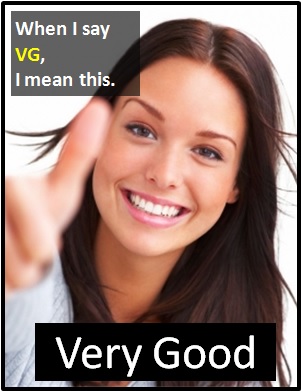 VG mens something or someone is better than normal.

Examples of VG in Sentences

Here are examples of VG being used in conversations:

An Academic Look at VG

VG is an initialism abbreviation. Technically, this means it is pronounced using its individual letters (i.e., Vee Gee), but as this is harder to say than "Very good," it is not often spoken using its letters. In other words, the abbreviation VG is for efficiency in writing and not efficiency in speech.

Example of VG Used in a Text

VG
Help Us To Improve Cyber Definitions
Please tell us using this form.