What Does IDEK Mean?

IDEK (I Don't Even Know) is most commonly used after an admittance of doing something stupid. In this meaning, the full version would be "I don't even known why I did it."

IDEK can also be used to portray an element of surprise at not knowing something that ought to be known.

When I write IDEK, I mean this: 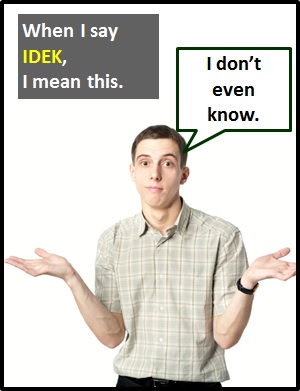 The full version of IDEK would be "I don't even known why I did it."

Examples of IDEK in Sentences

Here are examples of IDEK being used in conversations:

(Here, IDEK means "I don't even know" and emphasizes that something that should be known isn't known.)

An Academic Look at IDEK

IDEK is typically used as a standalone declarative sentence with the meaning "I don't even know why I did it." However, it can also be used like a transitive verb (i.e., one that takes a direct object). For example:

(Here, the direct object is the noun clause how to boil an egg.)

In the term "I don't even know," the word even is a limiting modifier, which typically modifies the word immediately to its right (here, know). Compare IDEK with "Even I don't know."

Of note, IDEK could be pronounced "ideck," which would make it an acronym as opposed to an initialism (pronounced using its individual letters, i.e., Aye Dee Ee Kay). However, as the term "ideck" is not in common use, IDEK must be considered an initialism abbreviation.

Before the digital era, we might have said something like "I really have no idea" instead of IDEK.

Example of IDEK Used in a Text