What Does IDK Mean?

IDK (I Don't Know) is a very common term used in internet chat forums and text speak. It is the basic form of numerous associated terms, including the following:

When I write IDK, I mean this: 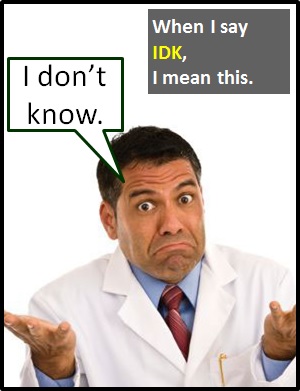 Examples of IDK in Sentences

Here are some examples of IDK being used in sentences:

An Academic Look at IDK

IDK is an initialism abbreviation. Technically, this means it is pronounced using its individual letters (i.e., Aye Dee Kay). However, as this is harder to say than "I don't know," it is not uttered using its letters. In other words, the abbreviation IDK is for efficiency in writing and not efficiency in speech.

The IDK can be used as a standalone sentence or it can take a direct object. For example:

(Here, IDK is a standalone declarative sentence. There is no direct object.)

(Here, the reason is the direct object.)

Of note, the letter D stands for "Don't" in lots of cyber definitions. It almost never stands for "Do" unless the term is a question or is accompanied with not. For example:

(In questions, the D often stands for Do.) (When D stand for Do and it is not in a question, it is usually accompanied with not.)

When D does stand for "Do," it is mostly an imperative verb (i.e., a command). For example:

Example of IDK Used in a Text

IDK
Help Us To Improve Cyber Definitions
Please tell us using this form.