What Does IIH Mean?

The abbreviation IIH is typically used to open a sentence in response to a question. IIH is often used to preface a response that might be considered blunt or hurtful, but can also indicate a lack of interest in the subject being discussed. For example:

When I write IIH, I mean this: 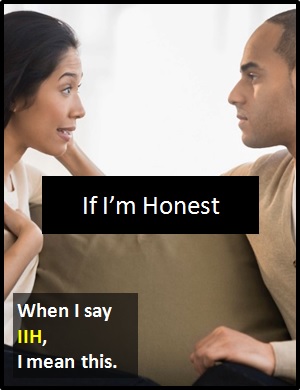 Examples of IIH in Sentences

Here are examples of IIH being used in conversations:

An Academic Look at IIH

Before the digital era, we might have said something like "To Tell The Truth" or even just "If I'm Honest" instead of using IIH.

Example of IIH Used in a Text