The abbreviation IMAHO is used with the meaning "In My Absolutely Honest Opinion" to emphasize that the sender is being totally honest or is totally sure they are right. It typically accompanies a piece of advice or a comment which the sender does not expect to be contradicted or challenged.

IMAHO differs greatly from IMO (In My Opinion) and even IMHO (In My Honest Opinion), both of which can accompany a message and make the author seem less forthright and authoritative. IMAHO carries a connotation of "You would be foolish to disagree with me."

As with many other phrases which offer opinion, IMAHO is often used by people with passive-aggressive personalities (i.e., people who mask their controlling or aggressive nature by using non-emotive and non-confrontational language).

When I write IMAHO, I mean this: 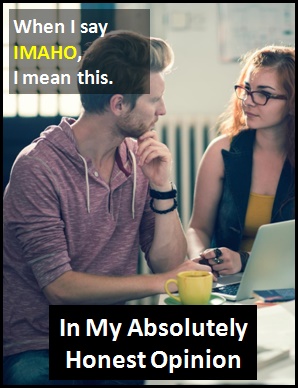 IMAHO you would be mad not to listen to me.

Examples of IMAHO in Sentences

Here are examples of IMAHO being used in conversations:

An Academic Look at IMAHO

IMAHO is an abbreviation of the prepositional phrase "In My Absolutely Honest Opinion" (the preposition is in), which is used as an adverb to establish the setting of the main clause. Compare the examples below:

Before the digital era, we would have just said "In My Absolutely Honest Opinion" or something like "To Be Completely Honest" instead of using IMAHO.

Example of IMAHO Used in a Text