The abbreviation ILYB is most commonly used with the meaning "I Love You Baby," as a term of affection between two people who are romantically involved.

ILYB is also used with the meaning "I Love You Both." In this context, ILYB is typically used by a child or young adult when saying goodbye to parents or grandparents. It could also be used to declare that someone is romantically attached to two people.

When I write ILYB, I mean this: 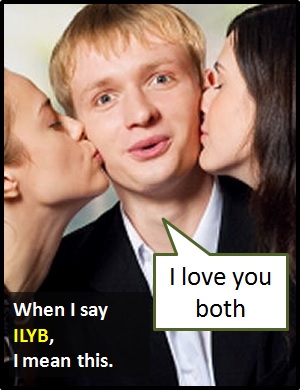 ILYB also used with the meaning "I Love You Baby."

ILYB also means "I Love You Both":

Examples of ILYB in Sentences

Here are examples of ILYB being used in conversations:

An Academic Look at ILYB

The abbreviation ILYB is typically used as a standalone declarative sentence (i.e., a statement). It is not normally used as another part of speech within a wider sentence.

As it is pronounced using its individual letters (i.e., "Eye Ell Why Bee"), ILYB is classified as an initialism abbreviation. Initialisms are different to acronyms, which are spoken like words

Before the digital era, we would have just said "I Love You Baby" or "I Love You Both" instead of using ILYB.

Example of ILYB Used in a Text