What Does IME Mean?

IME means "In My Experience."

The abbreviation IME is used with the meaning "In My Experience" to preface a comment or advice. It indicates that what is being said is based on relevant experience of the issue being discussed.

IME should not be confused with IMO (In My Opinion), which usually indicates that the comment or advice is not based on specific experience.

Of note, the abbreviation IME is also used in the medical field with the meaning "Independent Medical Examination." In this context, an IME is carried out by a doctor, physical therapist or other health professional who has not previously been involved with a patient, usually in order to offer an independent opinion.

When I write IME, I mean this: 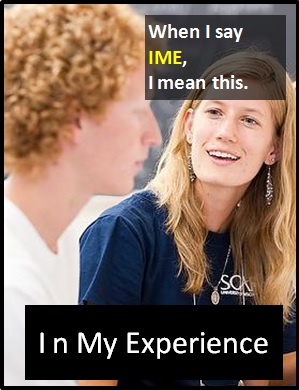 IME, people with red hair should take care in the sun.

Examples of IME in Sentences

Here are examples of IME being used in conversations:

An Academic Look at IME

As it is pronounced using its individual letters (i.e., "Eye Em Ee"), IME is classified as an initialism abbreviation. Initialisms are different to acronyms, which are spoken like words.

IME is an abbreviation of the prepositional phrase "In My Experience," (the preposition is "in"), which is used as an adverb to establish the setting for the main clause. Compare the examples below:

Before the digital era, we would have just said "In My Experience" instead of using the abbreviation IME.

Example of IME Used in a Text