What Does INRS Mean?

INRS means "It's Not Rocket Science."

INRS is typically used sarcastically, especially if someone is struggling to solve an easy problem.

When I write INRS, I mean this: 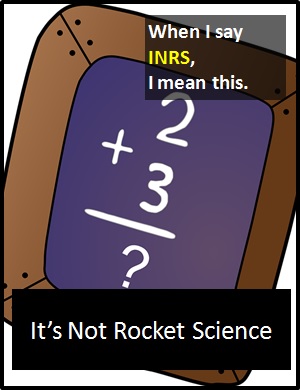 Examples of INRS in Sentences

Here are examples of INRS being used in conversations:

An Academic Look at INRS

INRS is typically used as a standalone declarative sentence (i.e., a statement). It is not normally used as another part of speech within a wider sentence.

Before the digital era, we would have just said "It's Not Rocket Science," or something like "It's Not That Hard," instead of using the abbreviation INRS.

Example of INRS Used in a Text