What Does OBVS Mean?

OBVS means "Obviously." The abbreviation OBVS is a shortened form of the word "Obviously." OBVS is used in response to a question or statement when a more detailed response isn't necessary.

Note: Using OBVS as a response can appear condescending, as it can imply the questioner is being stupid.

OBVS is one of many abbreviations of the word "Obvious." Others include:

When I write OBVS, I mean this: 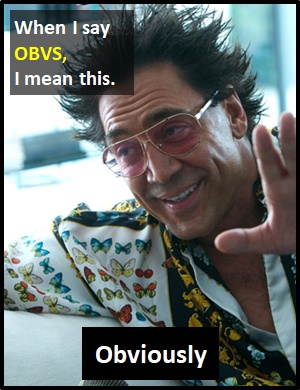 OBVS is obviously an abbreviation of "Obviously."

Examples of OBVS in Sentences

Here are examples of OBVS being used in conversations:

An Academic Look at OBVS

Before the digital era, we might have just said "Obviously" instead of using the abbreviation OBVS.

Example of OBVS Used in a Text