What Does IRMC Mean?

IRMC means "I Rest My Case."

The abbreviation IRMC is used with the meaning "I Rest My Case" when the sender feels that they have proved a point they wished to make and don't need to say anymore. IRMC is commonly used as an ironic response to another's statement when they have said something that inadvertently reinforces the point being made.

The phrase "I Rest My Case" originated in courtrooms, where it is often used by both defence and prosecution lawyers when they have presented all of their evidence.

When I write IRMC , I mean this: 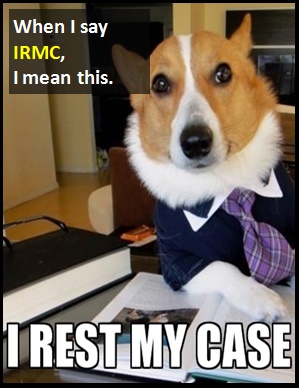 I Rest My Case originated in courtrooms.

Examples of IRMC in Sentences

Here are examples of IRMC being used in conversations:

An Academic Look at IRMC

The abbreviation IRMC is typically used as a standalone declarative sentence (i.e., a statement). It is not normally used as another part of speech within a wider sentence.

Before the digital era, we would have just said "I Rest My Case" or something like "That Proves My Point" instead of using IRMC .

Example of IRMC Used in a Text