What Does ISHK Mean?

ISHK means "I Should Have Known."

The abbreviation ISHK is typically used with the meaning "I Should Have Known" as an admission of responsibility or guilt when the sender has made a mistake that they had the knowledge or experience to avoid. ISHK is also often used sarcastically, when the sender wishes to make it clear that their only mistake was to have had confidence in another person.

In 2011, British band "The Foo Fighters" released a track entitled "I Should Have Known," which allegedly examines the conflicting emotions of lead singer Dave Grohl following the loss of a childhood friend to a drugs overdose.

When I write ISHK, I mean this: 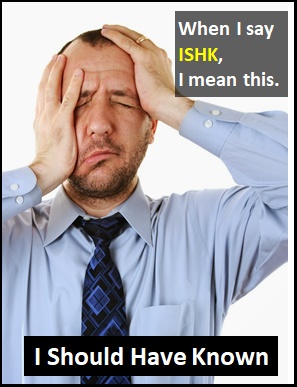 ISHK means "How diid I miss that!"

Examples of ISHK in Sentences

Here are examples of ISHK being used in conversations:

An Academic Look at ISHK

As it is pronounced using its individual letters (i.e., "Eye Ess Aitch Kay"), ISHK is classified as an initialism abbreviation. Initialisms are different to acronyms, which are spoken like words.

Example of ISHK Used in a Text

SHK (Should Have Known) ICBI (I Can't Believe It) MELT (Idiot)