What Does SHK Mean?

SHK means "Should Have Known."

The abbreviation SHK is used with the meaning "Should Have Known" as an admission or accusation of responsibility or guilt when someone has made a mistake that they had the knowledge or experience to avoid.

When I write SHK, I mean this: 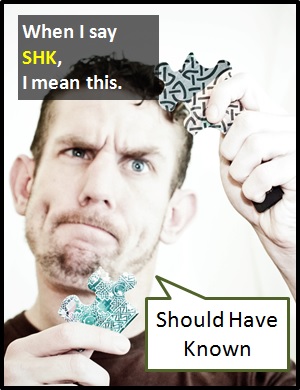 SHK this puzzle would be difficult.

Examples of SHK in Sentences

Here are examples of SHK being used in conversations:

(Here, SHK is being used with the meaning "I Should Have Known.")

(Here, SHK is being used with the meaning "You Should Have Known.")

An Academic Look at SHK

As it is pronounced using its individual letters (i.e., "Ess Aitch Kay"), SHK is classified as an initialism abbreviation. Initialisms are different to acronyms, which are spoken like words.

Before the digital era, we would have just said "Should Have Known" or something like "I'm Not Surprised" instead of using the abbreviation SHK.

Example of SHK Used in a Text