Of course, ITSK can be used in many other contexts for which the meaning of its words can be taken literally. However, ITSK usually carries a connotation of "Don't worry. It will be fine."

When I write ITSK, I mean this: 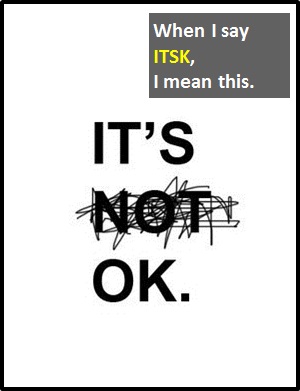 ITSK (It's Okay) usually carries a connotation of "Don't worry. It will be fine."

Examples of ITSK in Sentences

Here are examples of ITSK being used in conversations:

(Here, ITSK consoles Person A after an admittance of doing something stupid.)

(Here, ITSK consoles Person A after an admittance of overstepping a boundary.)

An Academic Look at ITSK

ITSK is not technically an initialism abbreviation as the only word abbreviated is "Okay" and even this is not represented by its initial letter. ITSK is best described as a cyber term, which has emerged for efficiency in writing.

Before the digital era, we might have said something like "things will be fine" or "try not to worry about it" instead of ITSK.

Example of ITSK Used in a Text