What Does MK Mean?

The abbreviation MK has many meanings: Here is more information about each of these definitions of MK, with examples of use.

In general text chat MK usually means "Mmm okay." It is used to express agreement or acceptance (but not always enthusiasm). For example: "Mmm okay" is also abbreviated as MKAY and MMK.

The letters MK are the initials of American DJ "Marc Kinchen," who is known by his stage name MK.

As well as being a DJ, MK is a record producer and remixer. MK had his first number-one hit on the US Billboard Hot Dance Music/Club Play chart in 1993, and has since enjoyed worldwide chart success. (Check out MK's #StayHome Covid-19 fundraiser below.)

The abbreviation MK is often used to refer to the "Magic Kingdom" theme park at the Walt Disney World Resort in Bay Lake, Florida.

MK is also used online to refer to the "Mong Kok" culture, which is the culture specific to the area of Mong Kok, Hong Kong.

Mong Kok is a lively area with a variety of entertainment venues. It is popular with teenagers and young adults, which has led to the rise of a vibrant and distinct local culture.

Project "MK Ultra" was the name given to a CIA program of experiments on human subjects, intended to identify and develop drugs and procedures to be used in interrogations.

The MK mind control program began in 1953 and was officially halted in 1973.

MK is also used to refer to a multinational fashion company, founded in 1981 by American designer Michael Kors.

The MK company sells clothes, shoes, watches, handbags and other accessories. As the MK name is associated with expensive fashion items, the company's name is often seen in the subject line of spam and phishing emails.

When I write MK, I mean this: 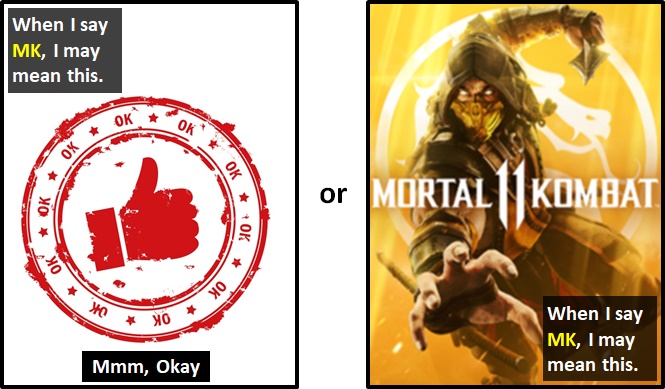 MK also has a number of other meanings.

"Marc Kinchen" (DJ) is a common definition for MK among music fans.

"Magic Kingdom" (Disney Park) is another common definition for MK.

"Mortal Kombat" is a common definition for MK on gaming related apps, such as Discord and TeleGram.

"Mong Kok" (Hong Kong) is another definition for MK.

"MK Ultra" is another definition for MK.

"Michael Kors" is another definition for MK.

Examples of MK in Sentences

An Academic Look at MK

As it is pronounced using its individual letters (i.e., "Emm Kay"), MK is usually classified as an initialism abbreviation. Initialisms are different to acronyms, which are spoken like words.

Example of MK Used in a Text