IWHI (I Would Hit It) is typically used between males on chat forums when looking at pictures of women. "I Would Hit It" is a colloquialism for "I would sleep with [her]". The word "hit" is a euphemism for "sleep with."

Even though the word "it" has derogatory overtones, IWHI is effectively a compliment meaning "She is attractive." (Of course, IWHI can be used among women about men, but this is currently rare.)

When I write IWHI, I mean this: 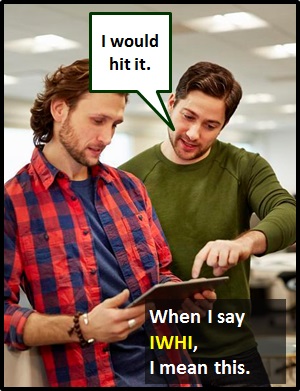 "I Would Hit It" is a colloquialism for "I would sleep with [her]".

Examples of IWHI in Sentences

Here is an example of IWHI being used in a conversation:

An Academic Look at IWHI

IWHI is used as a standalone declarative sentence (i.e., a statement).In other words, it is not used as another part of speech within a wider sentence.

IWHI is an initialism abbreviation. Technically, this means it is pronounced using its individual letters (i.e., Aye Dublyu Aich Aye), but as this is far harder to say than "I would hit it," it is not often said using its letters. In other words, the abbreviation IWHI is for efficiency in writing and not efficiency in speech.

Before the digital era, we might have said something like "I would" or "Marks out of 2? I'd give her 1" instead of IWHI.

Example of IWHI Used in a Text