The abbreviation IWSN is used with the meaning "I Want Sex Now" as a declaration that the sender wants sex at that very moment. IWSN is often used in adult chat forums and on dating sites. Outside of such forums, it is typically sent as a joke and is rarely taken seriously.

When I write IWSN, I mean this: 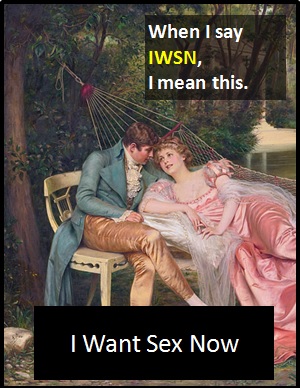 "I Want Sex Now" is often said as a joke.

Examples of IWSN in Sentences

Here are examples of IWSN being used in conversations:

An Academic Look at IWSN

IWSN is an initialism abbreviation. Technically, this means it is pronounced using its individual letters (i.e., Eye Dublyu Ess Enn), but as this is harder to say than "I Want Sex Now," it is not often spoken using its letters. In other words, the abbreviation IWSN is for efficiency in writing and not efficiency in speech.

Example of IWSN Used in a Text