What Does IJWTS Mean?

The abbreviation IJWTS is used with the meaning "I Just Want to Say" to ease into a conversation or emphasise a point. It is typically used when broaching a potentially sensitive subject or when handing out public criticism or praise. For example:

When I write IJWTS, I mean this: 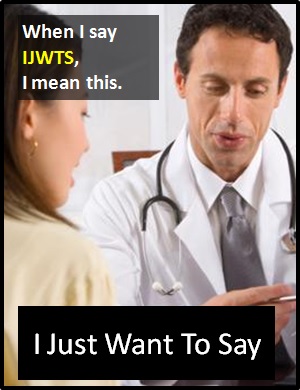 IJWTS, according to Google, you're wrong.

Examples of IJWTS in Sentences

Here are examples of IJWTS being used in conversations:

An Academic Look at IJWTS

IJWTS is an initialism abbreviation. Technically, this means it is pronounced using its individua letters (i.e., Eye Jay Dblyoo Tee Es), but as this is harder to say than "I Just Want To Say," it is not spoken using its letters. The abbreviation IJWTS is really for efficiency in writing and not efficiency in speech.

Before the digital era, we would have just said "I Just Want To Say" instead of using IJWTS.

Example of IJWTS Used in a Text