What Does KWIM Mean?

KWIM means "Know What I Mean?".

The abbreviation KWIM is used with the meaning "Know What I Mean?" to seek confirmation that a point has been understood.

The phrase "Know What I Mean?" is also often abbreviated as KWAM.

When I write KWIM, I mean this: 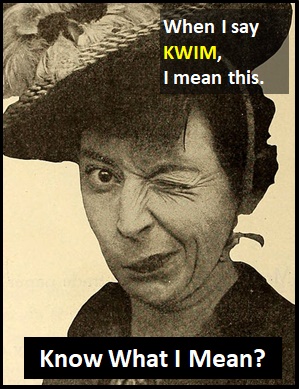 Examples of KWIM in Sentences

Here are examples of KWIM being used in conversations:

An Academic Look at KWIM

As it is pronounced using its individual letters (i.e., "Kay Dublyoo Eye Em"), KWIM is classified as an initialism abbreviation. Initialisms are different to acronyms, which are spoken like words.

KWIM typically plays the role of an interrogative sentence (i.e., a question) but, in text-based messaging, it is commonly seen without a question mark. It can be written "KWIM?" or "KWIM".

The phrase "Know What I Mean" is often used as a double entendre (i.e., a word or phrase open to two interpretations, one of which is risqué or indecent). For example:

Before the digital era, we might have said something like "If you get my drift" or "Know what I'm saying?" instead of using the abbreviation KWIM.

Example of KWIM Used in a Text