NAWM is effectively a slang version of the abbreviation KWIM ("Know What I Mean"). The letters "N" and "A" replace the letter "K," as in some accents "Know" is actually pronounced as "Na," and the letter "I" is dropped completely as the "W" stands for "What I."

When I write NAWM, I mean this: 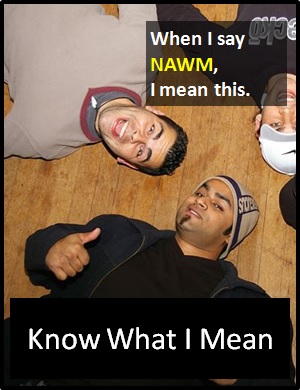 NAWM is "cool" slang for "Know What I Mean."

Examples of NAWM in Sentences

Here are examples of NAWM being used in conversations:

An Academic Look at NAWM

"Know What I Mean" is a slang phrase used with the meaning "Do you understand what I'm saying?". Slang refers to words, phrases and uses of language that are regarded as very informal and which are often restricted to a special context or a particular group of users.

As it is pronounced using its individual letters (i.e., "Enn Ay Dblyoo Emm"), NAWM is classified as an initialism abbreviation. Initialisms are different to acronyms, which are spoken like words.

NWAM plays the role of an abbreviated interrogative sentence (i.e., a question), but it is commonly seen without a question mark. In other words, it can be written "NAWM?" or "NAWM".

Before the digital era, we might have just said " Know What I Mean?" or something like "Do you understand?" instead of using NAWM.

Example of NAWM Used in a Text

NAWM
Help Us To Improve Cyber Definitions
Please tell us using this form.