What Does LIGIT Mean?

"Legitimate" is also abbreviated as LEGIT.

When I write LIGIT, I mean this: 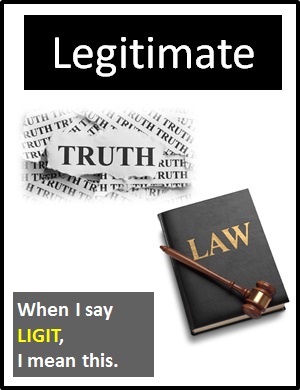 Examples of LIGIT in Sentences

Here are examples of LIGIT being used in conversations:

An Academic Look at LIGIT

LIGIT is a slang word. Slang refers to words, phrases and uses of language that are regarded as very informal and which are often restricted to a special context or a particular group of users.

LIGIT is a shortened version of the word "Legitimate," therefore, it could be classified as a contraction. However, if it was a true contraction of "Legitimate," the first "I" should be an "E" (as in the abbreviation LEGIT). The misspelling is deliberate, probably to add a sense of fun.

Before the digital era, we might have just said "Legitimate" instead of using LIGIT.

Example of LIGIT Used in a Text