What Does MBPS Mean?

MBPS (Megabits Per Second) is used to measure data transfer speeds of high bandwidth connections, such as Ethernet and cable modems.

One megabit is equal to one million bits or 1,000 kilobits. While "megabit" sounds similar to "megabyte," a megabit is roughly one eighth the size of a megabyte (since there are eight bits in a byte).

Of note, MBPS is often shortened to “megs” or “meg” in conversations. (For example, “I am only getting 2 meg download speed at the moment.”)

When I write MBPS, I mean this: 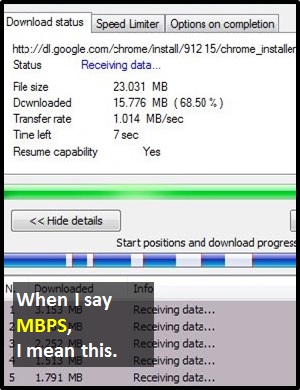 Examples of MBPS in Sentences

Here are examples of MBPS being used in a conversation:

An Academic Look at MBPS

MBPS is an initialism abbreviation. This means it is pronounced using its individual letters (i.e., Emm Bee Pee Ess). (Initialisms contrast with acronyms, which are spoken like words.)

Example of MBPS Used in a Text