What Does NTSC Mean?

NTSC (National Television System Committee) is the analogue television standard that was used in most of the Americas (except Brazil, Argentina, Paraguay, Uruguay and French Guiana), Burma, South Korea, Taiwan, Japan, the Philippines and some Pacific island nations.

Developed in 1941, NTSC was the first widely adopted broadcast colour system and remained dominant until around 2010, after which date digital standards such as ATSC and others began to replace it. Initially, NTSC was designed for black-and-white television and had no provision for colour. In 1953 a second NTSC standard was adopted, which allowed for colour television broadcasting which was also still compatible with existing black-and-white televisions.

Of note, NTSC is a separate system to the British PAL and French SECAM television standards. There is no cross-compatibility between these three standards, meaning that television sets designed for one standard cannot view broadcasts from another standard without the use conversion equipment.

When I write NTSC, I mean this: 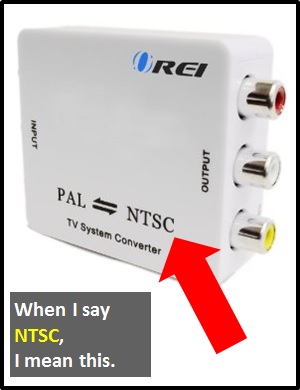 The image shows an NTSC-to-PAL converter.

Examples of NTSC in Sentences

Here is an example of NTSC being used in a conversation:

An Academic Look at NTSC

NTSC is an initialism abbreviation. This means it is pronounced using its individual letters (i.e., En Tee Ess See). Initialisms contrast with acronyms, which are spoken like words.

Example of NTSC Used in a Text

NTSC
Help Us To Improve Cyber Definitions
Please tell us using this form.