What Does OBTW Mean?

OBTW means "Oh, By The Way." The abbreviation OBTW is used to signal a change of subject in a conversation.

The phrase "Oh, By The Way" is typically used to introduce a new and often less important topic into a conversation. In this respect, it means almost exactly the same as the abbreviation BTW (By The Way), but the inclusion of the word "Oh" probably indicates that the sender has just thought of something they want to mention. However, OBTW is also often used as a preamble to important news, usually when that news was the real reason for getting in touch. For example:

When I write OBTW, I mean this: 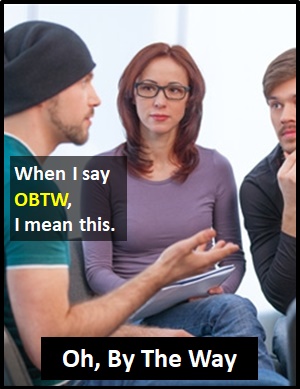 OBTW indicates a change of subject.

Examples of OBTW in Sentences

Here are examples of OBTW being used in conversations:

An Academic Look at OBTW

OBTW is an initialism abbreviation. This means it is pronounced using its individual letters (i.e., Oh Bee Tee Dublyoo). However, it is not usually spoken using its letters. The abbreviation OBTW is actually for efficiency in writing, rather than efficiency in speech.

Before the digital era, we might have said "Oh, By The Way," or something like "While we're on the subject," instead of using the abbreviation OBTW.

Example of OBTW Used in a Text