What Does PWM Mean?

PWM means "Professional White Male." PWM is typically used on dating sites to describe a white man (i.e., of so-called Caucasian origins) who is employed with a well-paid job.

PWM can also mean "Proud White Man," but this is a far less common meaning online.

When I write PWM, I mean this: 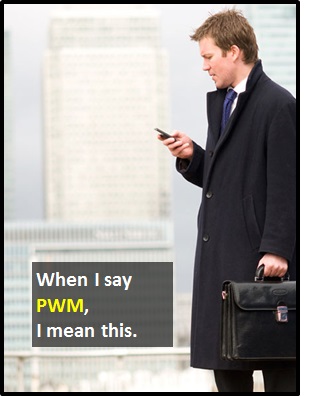 Examples of PWM in Sentences

Here are examples of PWM being used in conversations:

An Academic Look at PWM

PWM is typically used as a noun (i.e., a naming word). For example:

Of interest, dating sites are full of specialist abbreviations, which have their roots in a time when personal ads featured in local newspapers and users were charged by the word. (A term like PWM would cost the user the fee for one word as opposed to three.)

PWM is an initialism abbreviation. Technically, this means it is pronounced using its individual letters (i.e., Pee Dublyu Em), but as this is harder to say than "Professional white male," it is not often uttered using its letters. In other words, the abbreviation PWM is for efficiency in writing and not efficiency in speech.

Example of PWM Used in a Text