What Does RTM Mean?

The abbreviation RTM is used with the meaning "Read the Manual" as an instruction to a questioner to find the answer for themselves. RTM often expresses irritation on the part of the sender and implies that they feel that the questioner is trying to take advantage of them when they could easily have found an answer by reading the instructions or doing a bit of research. RTM is also often used when the answer to a question is blatantly obvious.

The abbreviation RTFM (Read The F**king Manual) is an even less polite way of saying the same thing. Other abbreviations with a similar meaning include:

When I write RTM, I mean this: 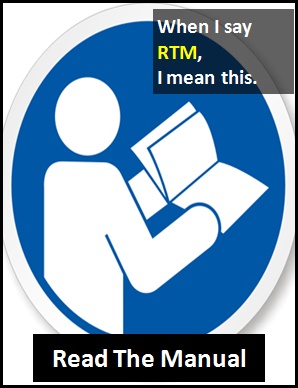 Examples of RTM in Sentences

Here are examples of RTM being used in conversations:

(Here, RTM implies that the sender feels the questioner is being lazy.)

(Here, RTM implies that the sender feels the answer is obvious.)

An Academic Look at RTM

The abbreviation RTM is typically used as an imperative (i.e., an order).

As it is pronounced using its individual letters (i.e., "Arr Tee Em"), RTM is classified as an initialism abbreviation. Initialisms are different to acronyms, which are spoken like words.

Before the digital era, we might have just said "Read the Manual," or something like "Find Out Yourself" instead of using the abbreviation RTM.

Example of RTM Used in a Text