What Does RUOK Mean?

The abbreviation RUOK is used with the meaning "Are You OK?", which is an interrogative phrase, typically used as a genuine enquiry as to someone's wellbeing.

Unlike abbreviations such as HAY (How Are You?) and HAYD (How Are You Doing?), RUOK usually expresses concern for the other person and implies that an answer is expected. It is often used following a traumatic event or when someone's behaviour is strange or out-of-character.

R U OK? is an Australian suicide prevention organisation founded in 2009. Every September, R U OK? organises a national day of action called "R U OK? Day."

When I write RUOK, I mean this: 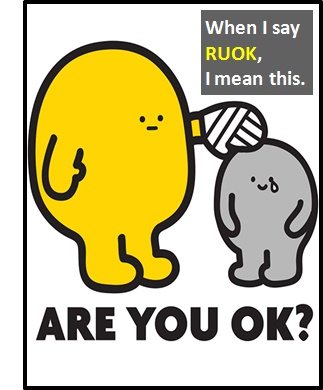 RUOK is usually a genuine question.

Examples of RUOK in Sentences

Here are examples of RUOK being used in conversations:

(Here, RUOK expresses surprise at behaviour that is out of character.)

An Academic Look at RUOK

RUOK plays the role of an interrogative sentence (i.e., a question), but it is commonly seen without a question mark. It can be written "RUOK?" or "RUOK".

As it is pronounced using its individual letters (i.e., "Arr Yoo Oh Kay"), RUOK is classified as an initialism abbreviation. Initialisms are different to acronyms, which are spoken like words.

Before the digital era, we might have just said "Are You OK" or something like "Do You Feel Alright?" instead of using the abbreviation RUOK.

Example of RUOK Used in a Text