What Does RUT Mean?

RUT means "Are You There?".

The abbreviation RUT is an acronym used with the meaning "Are You There?". RUT is typically used in text-based messaging to establish if someone is available to chat. It is also used to enquire as to whether someone who is travelling has reached their destination. When used in this second context, RUT is often followed by the adverb "yet." For example:

The phrase "Are You There?" can also be abbreviated as AYT.

When I write RUT, I mean this: 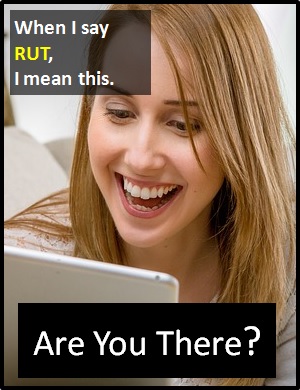 RUT is often used when establishing a connection online.

Examples of RUT in Sentences

Here are examples of RUT being used in conversations:

An Academic Look at RUT

RUT plays the role of an interrogative sentence (i.e., a question), but it is commonly seen without a question mark (i.e., it can be written "RUT?" or "RUT").

Before the digital era, we would have just said "Are You There?" or something like "Are You There Yet?" instead of using the abbreviation RUT.

Example of RUT Used in a Text