What Does YT Mean?

The abbreviation YT has a number of different meanings, including "YouTube," "Whitey," "You There?" "Your Turn," and "Yours Truly."

Here is more information about each of these definitions of YT, with examples of use.

The abbreviation YT is most widely used online, especially on social media apps such as TikTok to refer to the video sharing site YouTube. For example:

The individual letters of YT are pronounced as "why-tee" to refer to a white person (i.e., anyone who is not a person of color). For example:

YT is often used as a question, with the meaning "You There?" In this context, YT is a simple way of asking if someone is present and able to chat.

YT is sometimes used to refer to the sender as "Yours Truly." It is a synonym of the pronoun "me". For example:

When I write YT, I mean this: 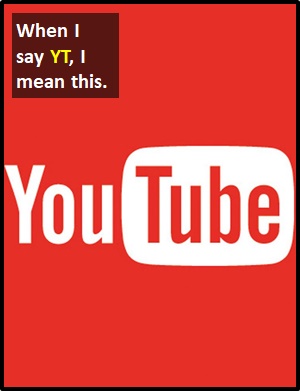 "Whitey" is another popular definition for YT.

YT also means "You There?"

"Your Turn" is another definition for YT, especially in gaming circles.

"Yours Truly" is another definition for YT.

An Academic Look at YT

When used with the meanings "YouTube," "You There?," "Yours Truly," and "Your Turn," YT is classified as an initialism abbreviation, because it is pronounced using its individual letters (i.e., "Why Tee").

When used to mean "Whitey," YT is an acronym (i.e., an abbreviation spoken like a word).

Example of YT Used in a Text