What Does SNACK Mean?

The word SNACK is used as slang to refer to an attractive or sexy person (i.e., someone who looks "good enough to eat"). For example: SNACK is sometimes spelled "SNACC". In the same vein, an attractive person may be called a meal.

When I write SNACK, I mean this: 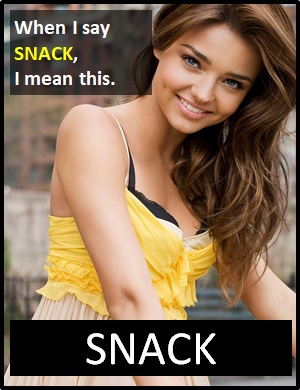 An Academic Look at SNACK

SNACK is typically used as a noun (i.e., a naming word). For example:

(Here, SNACK is being used as a noun.)

Before the digital era, we might have said something like "Hot chick" or "Real cutie" instead of using SNACK.

Example of SNACK Used in a Text