What Does SOFT BLOCK Mean?

The term soft block refers to a technique used on Twitter to discreetly remove a user from your list of followers. A soft block is accomplished by blocking the follower then immediately unblocking them. In this way, Twitter removes them as a follower without indicating why it has done so.

Take care when soft blocking! In theory, if the follower notices, you can blame it on a glitch in Twitter. In practice, the technique is now so widespread that most users will realize what has happened and may well take offense.

The term soft block is often abbreviated as SB.

When I write SOFT BLOCK, I mean this: 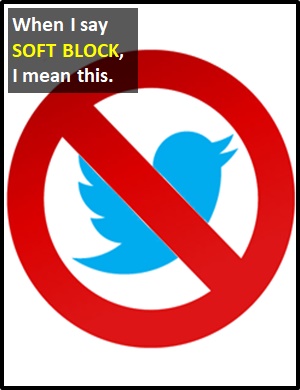 A SOFT BLOCK is used to discreetly remove a Twitter follower.

"Discreetly Remove a Follower on Twitter" is the most common definition for SOFT BLOCK. Here is some more information about SOFT BLOCK.

Examples of SOFT BLOCK in Sentences

Here are examples of SOFT BLOCK being used in conversations:

An Academic Look at SOFT BLOCK

SOFT BLOCK is a neologism (i.e., a newly coined word or phrase).

Example of SOFT BLOCK Used in a Text