TCCIC means "Take Care Cos I Care." It is typically used to sign off a conversation between good friends (as opposed to between people who love each other). However, this connotation does not always apply; i.e., the words can be taken literally and applied to your context.

Bear this in mind though: When sent from a boy who fancies a girl, TCCIC often aligns with this notion:

Girl's definition of a plutonic relationship: Someone I'm not having sex with.

Boy's definition of a plutonic relationship: Someone I'm not having sex with…yet.

When I write TCCIC, I mean this: 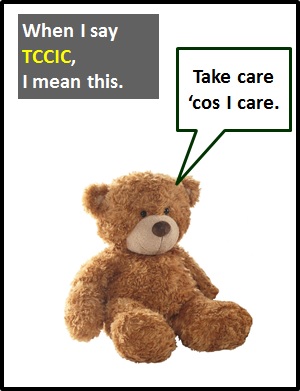 TCCIC is a soppy way of ending a conversation.

Examples of TCCIC in Sentences

Here is an example of TCCIC being used in a conversation:

An Academic Look at TCCIC

TCCIC is used as a standalone declarative sentence (i.e., a statement). In other words, it is not used as another part of speech within a wider sentence.

TCCIC is an initialism abbreviation. This means it is pronounced using its individual letters (i.e., Tee Cee Cee Aye Cee). (NB: Initialisms contrast with acronyms, which are spoken like words.)

Before the digital era, we might have said something like "I care for you" instead of TCCIC.

Example of TCCIC Used in a Text