The abbreviation TCFN is often used at the end of a text-based conversation with the meaning "Take Care for Now." The use of TCFN implies that the parting is temporary, but does not give any indication as to how long it is likely to be until the next contact.

Other abbreviations with similar meanings and usage to TCFN include:

When I write TCFN, I mean this: 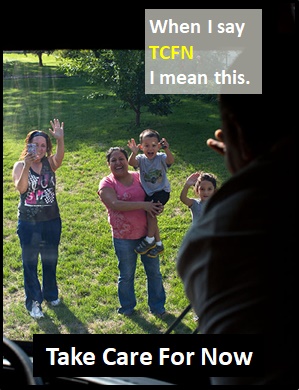 TCFN implies that the parting is temporary.

Examples of TCFN in Sentences

Here are examples of TCFN being used in conversations:

An Academic Look at TCFN

TCFN is often used as a standalone declarative sentence (i.e., a statement). It is not typically used as another part of speech within a wider sentence.

Before the digital era, we might have just said "Take Care For Now," or something like "Look After Yourself," instead of using the abbreviation TCFN.

Example of TCFN Used in a Text

ICAY (I Care About You) TCCIC (Take Care 'Cause I Care) TCGB (Take Care, God Bless)