What Does TC Mean?

TC means "Take Care." It is often used as a substitute for a stronger term of affection such as "love you" when the stronger term would be inappropriate (e.g., between couples who were romantically connected or who can't be). In this context, it can be difficult to interpret as it is often unclear whether the sender would like to send a stronger term, is deliberately avoiding a stronger terms, or is simply being polite. Also of note, TC is often used with full knowledge of the ambiguity it affords. In essence, it is a way of saying I care for you without overstepping the mark. Any hidden connotation is for you to interpret.

More simply, the abbreviation TC is used to say goodbye to someone while showing some concern for their wellbeing.

Additionally, TC was also an abbreviated name given to a popular cartoon character "Top Cat." This was an animated television series made by the Hanna-Barbera studios that first ran from September 27, 1961 on the ABC network.

When I write TC, I mean this: 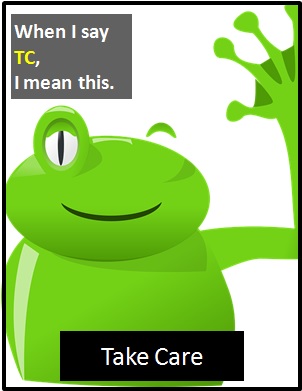 TC means "Take Care" and is used to add affection to "goodbye."

Examples of TC in Sentences

Here are examples of TC being used in conversations:

(TC is often used as a substitute for a stronger term of affection such as "love you.")

An Academic Look at TC

As it is pronounced using its individual letters (i.e., "Tee See"), TC is classified as an initialism abbreviation. Initialisms are different to acronyms, which are spoken like words.

TC can be used as an interjection (in other words, not grammatically related to any other part of the sentence). TC can also alone as an imperative, usually as a sign-off in a conversation.

Before the digital era, we might have said something like "mind how you go" or "safe travels" instead of TC.

Example of TC Used in a Text