What Does TRUMPISM Mean?

The term TRUMPISM means a policy advocated by the US President Donald Trump or a statement attributed to Trump. A TRUMPISM is typically a controversial (or even outrageous) statement, but it can also be a controversial challenge to the current political establishment or the controversial pursuit of a strategy in the American national interests.

Here are some examples of TRUMPISMS:

"I've said if Ivanka weren't my daughter, perhaps I'd be dating her."

When I write TRUMPISM, I mean this: 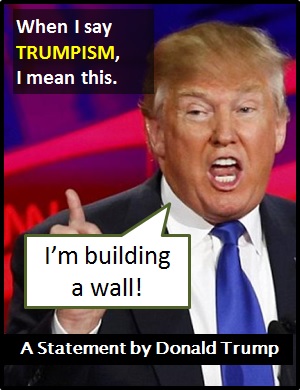 A Controversial Policy or Announcement by US President Donald Trump

Examples of TRUMPISM in Sentences

Here is an example of TRUMPISM being used in a conversation:

An Academic Look at TRUMPISM

The term TRUMPISM is a noun. Given it derives from a proper noun (the surname "Trump"), it should be written with a capital letter ("Trumpism").

Example of TRUMPISM Used in a Text

TRUMPISM
Help Us To Improve Cyber Definitions
Please tell us using this form.