The abbreviation TYBG is widely used with the meaning "Thank You BasedGod" as an alternative to abbreviations such as (Thank God) and (Thank God For That).

The use of TYBG began with fans of Bay Area rapper, Lil B "The BasedGod," but quickly spread and it is now popular even amongst people who have never heard of Lil B.

When I write TYBG, I mean this: 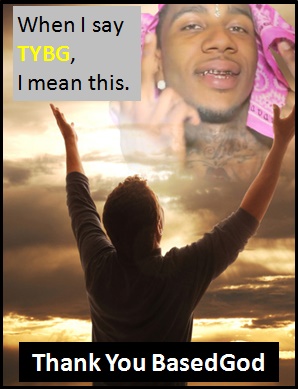 Thank Lil B for my good fortune!

Examples of TYBG in Sentences

Here are examples of TYBG being used in conversations:

An Academic Look at TYBG

TYBG is an interjection. Interjections are words used to express feeling or sudden emotion. They can be standalone or as part of a sentence (usually at the start). An interjection often ends in an exclamation mark to express a strong feeling or emotion.

TYBG is an initialism abbreviation. Technically, this means it is pronounced using its individual letters (i.e., Tee Why Bee Gee). However, it is not often uttered using its letters.

Before the digital era, we might have said something like "Thank God" or "Hallelujah" instead of using TYBG.

Example of TYBG Used in a Text