What Does VC Mean?

Here is more information about each of these definitions of VC.

VC is widely used with the meanings "Voice Channel," "Voice Chat," or "Video Chat" to refer to direct communication by voice or with video, as opposed to text messaging.

VC also means "Video Creator," which is any app or program which can be used to record, edit and share videos. (The most popular video creator at the moment, is the one incorporated into the video sharing app TikTok.)

In gaming, VC often refers to the Vice City edition of the Grand Theft Auto game series. VC is one of the most popular games ever published and is available on IOS and Android.

Also in gaming, VC is used to refer to the dungeon Deadmines in World of Warcraft, in order to avoid confusion with another dungeon called Dire Maul. VC stems from the surname of last boss in the dungeon, Edwin VanCleef.

Note: The use of VC or DM to refer to the Deadmines dungeon is a hotly debated topic in WOW circles.

VC was widely used during the 1950s, 60s and 70s, to refer to the "Viet Cong" guerrilla forces that fought in support of the North Vietnamese Army against South Vietnam and the US. The VC were officially disbanded in 1976, when Vietnam was united under a communist government.

In 2003, the first version of a first-person shooter video game called "Viet Cong" was published for Microsoft Windows. Further versions, expansion packs and add-ons were subsequently released for other platforms. The game enjoyed limited success, but is still available to purchase.

In the world of finance, VC is used to mean "Venture Capital" (sometimes "Venture Capitalist"). In this context, VC is a form of financing that is provided to (usually new) companies, in exchange for equity in the business.

For more information on what Venture Capital is and how it works , check out this video:


If You Know Nothing About Venture Capital, Watch This First | Forbes

"Video Creator" is another definition for VC.

When I write VC, I mean this: 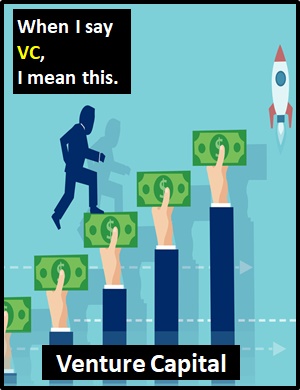 Examples of VC in Sentences

Here are examples of VC being used in conversations:

An Academic Look at VC

VC is both an initialism abbreviation and an acronym. It is pronounced using its individual letters ("Vee See"), which means that it is an initialism. However, these same letters are also typically used as an acronym for each of the definitions of VC.

Example of VC Used in a Text

VC
Help Us To Improve Cyber Definitions
Please tell us using this form.