What Does WOKE Mean?

WOKE means "Aware of and Attentive to Issues of Social and Racial Justice."

The word WOKE is a political term of black origin which refers to being aware of and attentive to issues of social and racial justice. WOKE is derived from the African-American expression "Stay woke" and dates back to at least the 1960s. However, it has been in widespread use in the mainstream since 2014, as a result of the Black Lives Matter movement.

As a result of a backlash from right-wing media pundits and commentators, WOKE has come to be used as a derogatory term to address anyone expressing concern about issues of social and racial justice (in the same way as PC (Politically Correct) before it). Like being anti-PC, being un-WOKE (or anti-"WOKISM") is a badge of honor for many who disagree that racial and social injustice continue to be issues in modern society.

Here are examples of WOKE being used in conversations: This parody from Saturday Night Live on NBC takes a humorous look at WOKE:

"Aware of and Attentive to Issues of Social and Racial Justice" is the most common definition for WOKE on Snapchat, WhatsApp, Facebook, Twitter, Instagram, and TikTok.

When I write WOKE, I mean this: 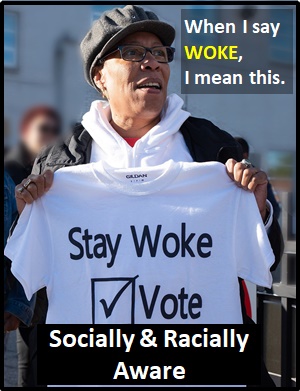 WOKE people are aware of and attentive to issues of social and racial justice.

An Academic Look at WOKE

WOKE is a slang word. It is an incorrect tense of the verb "awake," which means "to stop sleeping" or "to wake from sleep."

WOKE is typically used as an adjective (a describing word). For example:

(Here, the adjective WOKE modifies the pronoun "I.")

Example of WOKE Used in a Text

WOKE
Help Us To Improve Cyber Definitions
Please tell us using this form.