What Does WOO Mean?

WOO means "Court the Favor of," "Pseudoscience," and "New York Gang." Here is more information about each of these definitions of WOO, with examples of use.

Court the Favor of

Woo is a word which traditionally means "to court the favor of." Woo is used in both a personal and business context. For example:

Since at least the 1990s, woo has been used as a derogatory term to refer to any type of pseudoscience. For example:

Woo is also the name of a street gang, primarily based in Brooklyn, New York.

The Woo gang hit the headlines in February 2022, when a number of members were charged in connection with a multi-million dollar COVID-19 unemployment insurance fraud.

Among fans of rap music, the gang was already known because its name featured in the song "Meet the Woo", released in 2020, by rapper Pop Smoke.

When I write WOO, I mean this: 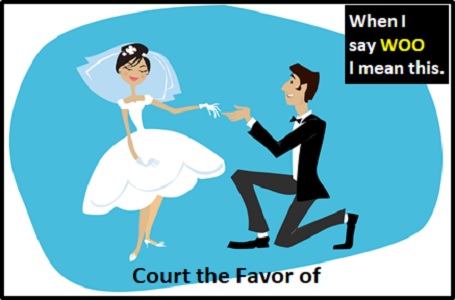 WOO also means "Pseudoscience" and is the name of a New York gang.

Summary of Key Points for the First Definition

"Pseudoscience" is another common definition for WOO.

"New York Gang" is yet another common definition for WOO.

Example of WOO Used in a Text