YGPM means "You've Got a Private Message." YGPM alerts the recipient to the arrival of a personal or private message. The abbreviation YGPM is used by people abbreviating the full version, which is in common use with social-media sites such as Facebook or Twitter.

YGPM has its roots in YGM (You've Got Mail); however, it refers to a PM (Private Message) on social media as opposed an email.

When I write YGPM, I mean this: 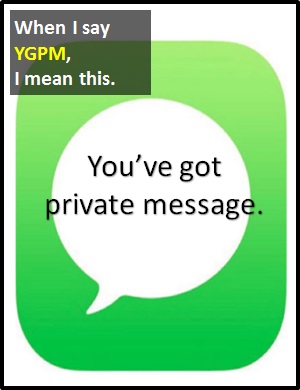 Examples of YGPM in Sentences

Here are examples of YGPM being used in conversations:

An Academic Look at YGPM

YGPM is used as a standalone declarative sentence (i.e., a statement). In other words, it is not used as a part of speech in a wider sentence.

Of interest, YGPM is an initialism abbreviation. Technically, this means it is pronounced using its individual letters (i.e., WY Gee Pee Em), but as this is harder to say than "You've got a private message," it is not often uttered using its letters. In other words, the abbreviation YGPM is for efficiency in writing and not efficiency in speech.

Before the digital era, we might have said something like "you've got a personal telegram" instead of YGPM.

Example of YGPM Used in a Text