What Does YGM Mean?

YGM means "You've Got Mail." The term YGM can be taken literally (i.e., it denotes that you have some mail (often an email). (NB: Programs that notify you of new mail use the full term, but people often abbreviate this to YGM.)

YGM can also mean "You get me?" In other words, it is used after an instruction to confirm understanding.

When I write YGM, I mean this: 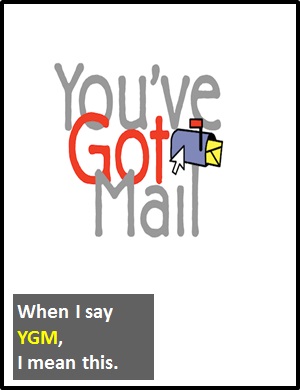 You've got mail (YGM) usually means that you have received an email.

Examples of YGM in Sentences

Here is an example of YGM being used in conversation:

An Academic Look at YGM

YGM is an initialism abbreviation. Technically, this means it is pronounced using its individual letters (i.e., Wye Gee Em), but as this is harder to say than "You've got mail" or "You get me," it is not often uttered using its letters. In other words, the abbreviation YGM is for efficiency in writing and not efficiency in speech.

Before the digital era, we would have simply said "you have mail" or "do you understand?" instead of YGM.

Example of YGM Used in a Text