In the term 1432, the "143" part represents the number of letters in each word. More specifically: The "2" is different. It represents the word "too." It works because "two" and "too" are homonyms (i.e., words that sound the same).

1432 usually appears at the end of a conversation as a sign-off (normally in response to "I Love You.") It is most typically used as a response to the term 143 (I love you).

Here is a short video summarizing how the numeronym 1432 works. (Note: A numeronym is a term made up of just numbers.) 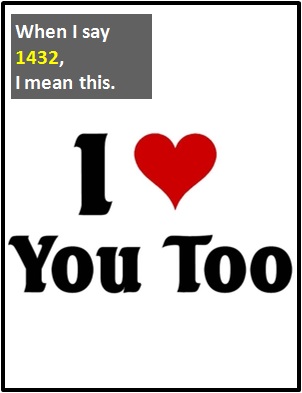 Examples of 1432 in Sentences

Here is an example of 1432 being used in a conversation:

1432 is classified as a numeronym as opposed to an initialism abbreviation or an acronym. Numeronyms are terms made up of just numbers.

Before the digital era, we would have just said "I love you too" instead of 1432.

1432
Help Us To Improve Cyber Definitions
Please tell us using this form.